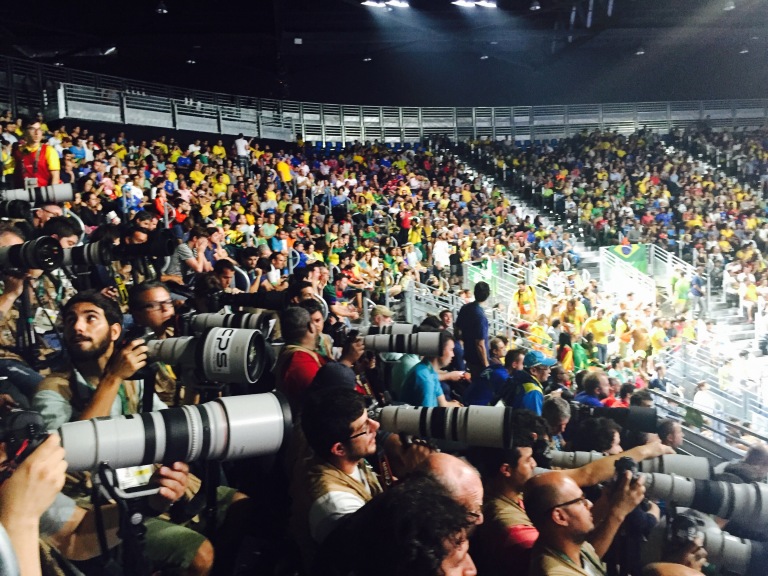 1. Boxing Fun: Yesterday I was busy directing photographers where to go and then escorted the heavyweight medalists through the mixed zone interview area and then into the press conference room. In between, I held the microphone for coaches during interviews. The Russian, Tischenko, defeated the Kazak boxer in a very controversial decision. I didn’t see the fight but everyone else was shocked. The whole arena boo-ed when the Russian was awarded his gold medal (terrible sportsmanship). His talented Russian volunteer interpreter explained that Tischenko was really stressed and felt bad about the result, that he was worried about everyone’s reaction and he couldn’t celebrate winning. The press kept asking him, “Do you think it’s fair that you won?” Every time, he would reply, “Well, I just said this, but if they declared me the winner, they must have had a reason.” I felt bad for him and later said congrats, gave him a thumbs-up, and handed him an American flag pin. Today we had the 60 kg men’s gold medal bout between France and Brazil. The Brazilian boxer, Robson, won Brazil’s first-ever boxing gold and the sold out arena went crazy. Afterwards, I was helping to escort boxers again. The third place Cuban boxer, Alvarez peaced out, refusing to stay for the press conference despite my attempts to get him to sit still. Robson was brilliant, likeable, and charming for the press. Very cool to see him win in person! 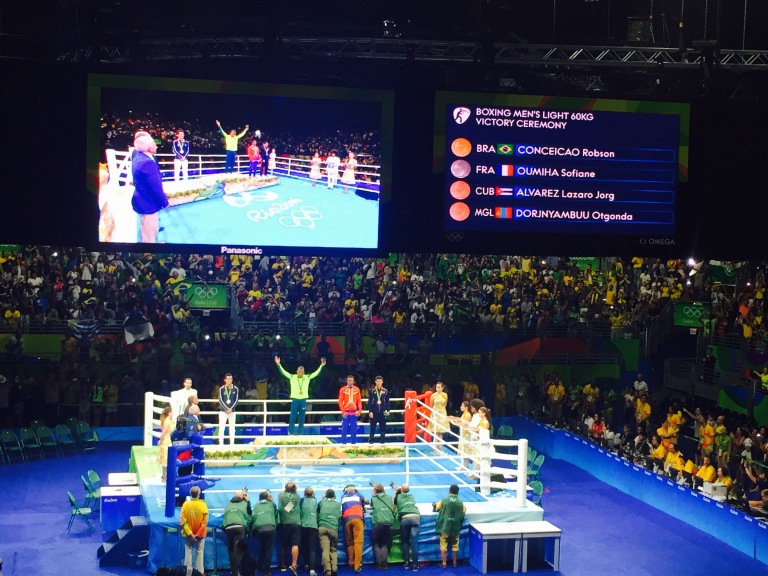 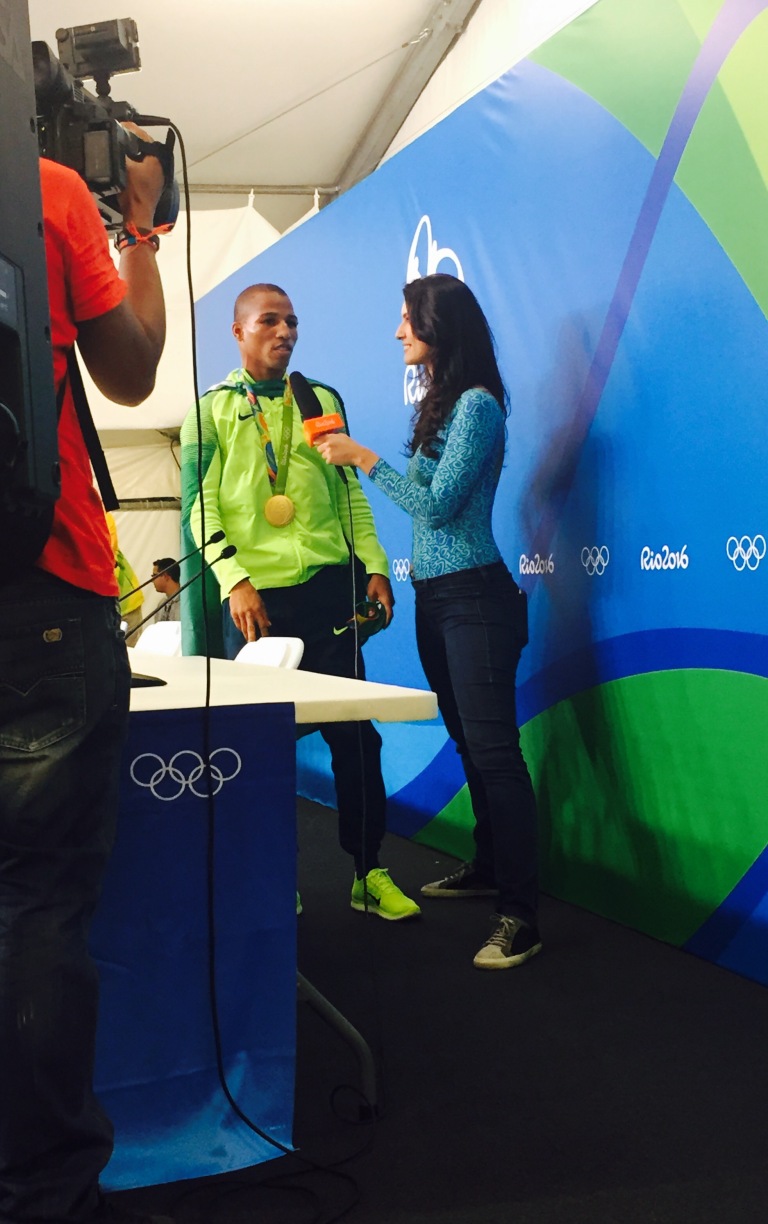 2. Rio Transport: The past few days, I’ve had to work the later 3-9pm shift so instead of taking three buses and then walking home, I’ve opted to take one bus (BRT) and then uber from there. Much easier, faster, and safer! Last night’s uber driver was Sergio who offered me snack and water when I got in the car. He couldn’t speak English but we somehow conversed the whole 30 min ride in a mix of Portuguese, Spanish, and Italian! He kept asking me why I was staying so far out in the middle of nowhere and I would reply, “Because it’s very safe!” Then, he’s point to all of the closed places on the side of the road and say, “It’s not safe, everyone is just sleeping right now. There’s nothing here!” The ride home was a big trip. The remainder of my days I either have off or am only working 1-6pm so I won’t have to resort to uber as much. Kind of dreading Aug 22 when our Rio transport card will no longer work.

3. Olympic Village: There is an Olympic Village newspaper published almost daily. The latest edition I saw had a bunch of athletes’ faces in it and you had to guess which countries they were from. Also, the village has its own post office and I’ve heard that there are special Olympic Village stamps if you mail things from there. When I go by the village every day, I see all the flags hanging off the balconies there so I can see where each team is staying. Perhaps unsurprisingly, I can’t see any American flags – willing to bet this is for security reasons! 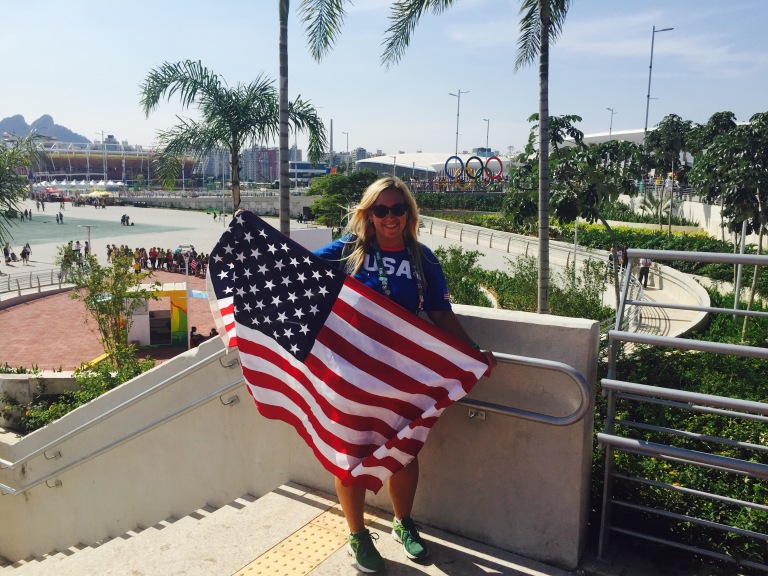 4. Doping Control: Now this is a very interesting aspect of the Games. Many volunteers are assigned to doping control. Their mission is to go knock on the door of their assigned athletes to wake them up at like 6am and then the volunteer must follow them around prior to and after the event to ensure no doping. I talked to one of these volunteers today and he said the Russians he’s worked with have been very accommodating. One time, when he went to go pick three of them up, they said they had to go see the doctor, so he followed them. They woke up the doctor very early and then explained that they used the doping control volunteer as an excuse to make the team doctor physically get out of bed that day. I have met the doping control volunteers who come through with our boxers and they simply hold on to the boxer’s accreditation badge and carry around a checklist clipboard to make sure the Games are drug free.

5. Event Action: This morning, Kendell Haynes and I attended the water polo quarterfinals action between Hungary and Montenegro and then Spain and Serbia. After walking all the way to the Maria Lenk Aquatic Center because that’s what it said on our tickets, we were told that the water polo matches had all been moved to the main swimming stadium, another 15 minute walk away. We sat in the main Hungarian cheering section – loved that many of them were wearing Hun-believable t-shirts distributed by a travel agency there. Pretty sure all of the Montenegro fans in Rio were at that match. Montenegro won in a shootout after Hungary tied it with one min left. Serbia beat Spain to advance. Water polo was pretty thrilling to watch but I could see that there was a lot of battering and bruising under the water. 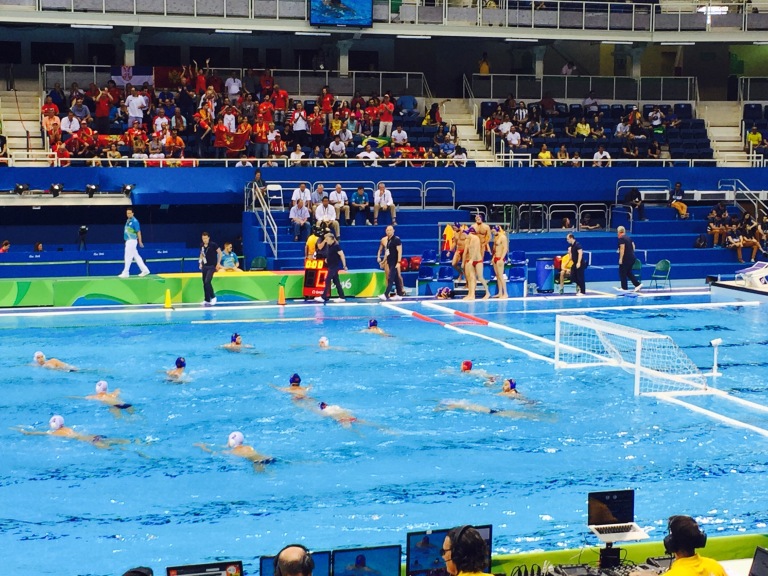 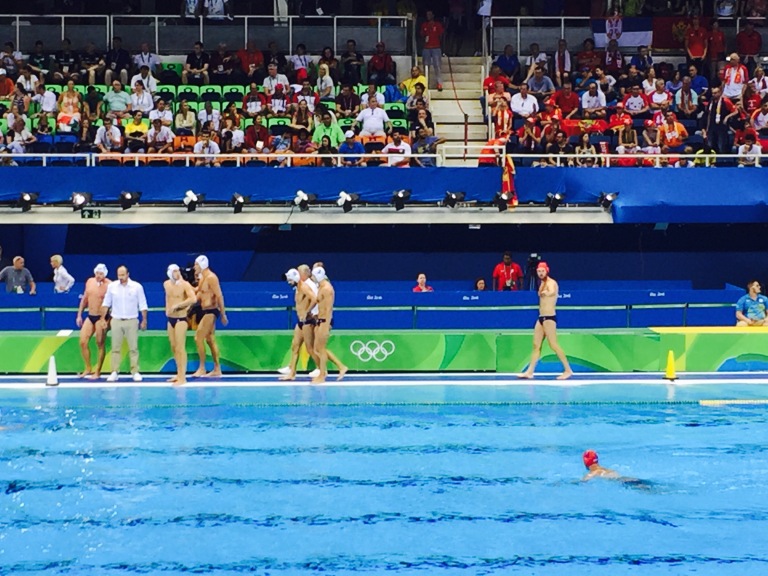 6. Olympic Pins: You can literally buy over 100 different Olympic pins at the Rio Olympic Park megastore here. Each one costs about $9-10 USD. Since I brought so many American flag ones, I’ve taken to handing them out to Olympic staff who don’t have many pins or volunteers who have crappy jobs out in the sun. Kendell and I came across a group of mentally challenged volunteers in Olympic Park and started handing them out like candy to them. Their smiles were so big – they looooved the pins. We then proceeded to get semi-mobbed by other people wanting pins and I was probably surrounded by about 20 people when I ran out for the day. I wanted to give them to only volunteers so some that weren’t in uniform were showing me their accreditation as proof. One for pretty angry when she didn’t get one. People get way too crazy about these darn pins! I think they are best utilized as a way to cheer people up. 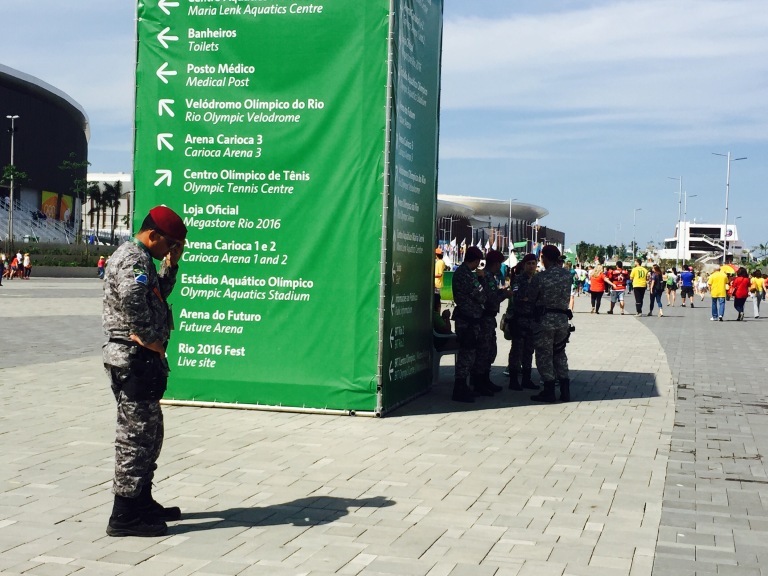 7. Foreign Staff/Volunteers: Earlier tonight, we had a Brazilian member of the press refuse to leave an area he didn’t have accreditation for. A shouting match ensued and after he told a foreign member of staff to go back to her home country, we had to call security (national military police). I was shocked at his behavior because I truly believe that these Games would not be possible without the know-how and physical presence of foreign workers and volunteer staff. I think I am still in awe of his unacceptable reaction. While it was incredibly disrespectful, I know that the vast majority of Brazilians here do not share this view.

8. Volunteer Life: I spoke with a Tokyo 2020 observer from Yokohama today. Interestingly, he told me that the committee had decided to only serve cold food at their concession stands even though many were wanting to offer hot food as well. When he said he wanted to try our workforce food 😂😂, I told him to get ready for a lot of carbs!! Also caught up with some friendly Swiss badminton referees who were telling me how exciting their sport was, encouraging me to come watch the semi finals of their sport. They were jealous when I told them I had to work that Brazil gold medal fight instead and lamented that they couldn’t make it themselves.